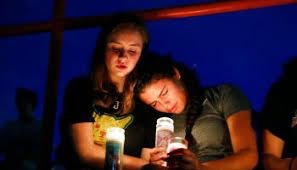 It’s a challenge to know what to say that hasn’t been said. It’s hard to know how to process the pain, suffering, and loss…the depths of despair. How to come to terms with the insanity of going to bed grieving over another act of senseless violence in our county only to awaken to the news of even more.

It’s easy to just see this as yet another tragedy among many that we add to a list of statistics. Numbers are easier to get our heads around than looking at the heartbreaking stories those numbers represent. But Jordan Anchondo isn’t a statistic. She was a 25-year old mother of three who died at the hands of a radicalized and hate-filled man as she shielded her two-month old son.

All the others lost in El Paso and Dayton and Gilroy and Southaven in the past days have their stories too. It would overwhelm us to hear each tale. But maybe we should. Maybe that’s what we need. The horror is real. It’s not about numbers. It’s about families torn apart. Sons and daughters and mothers and fathers lost. They are not just numbers in a list.

All in all? 251 shootings involving mass casualties — injured or dead or both — since the year began 215 days ago.

All in all? In less than seven years since the mass murder of innocent children at Sandy Hook Elementary over 7000 children have died in our nation due to gun violence. Over 7000 children. If this does not break our hearts, and simultaneously enrage us, then shame on us.

And now El Paso. We are reminded again of the price we will continue to pay as a nation so long as our leaders embolden white supremacists and domestic terrorists by advancing racist tropes (or by making excuses for those who do).

Admittedly, not all of the thousands of gun deaths we see across our nation are the result of hate-inspired terrorist actions like the shooting in El Paso. But there is no denying that all the innocents who have died were victims of a society in crisis.

Gun violence has been out of control for years and we all know it. But our leaders, influenced by the NRA’s money and power, too often turn away from their responsibility The demands of the gun lobby matter more to them than the lives of our citizens…than the lives of our children. Fear of losing political advantage is enough to cause these failed leaders to turn a blind eye. We have become a nation where courage and decency and morality are no longer the requirements of leadership.

And we cannot take comfort by pretending it’s ”just” terrorists, or criminals, or gang members or folks with deep seated emotional or psychological issues who are the problem. Your neighbor, your cousin, your brother-in-law or your sister-in-law could be a threat too. Ordinary men and women with unfettered access to guns. Ordinary men and women who find it too easy to turn their weapons on those who challenge them, those they fear, or even just those who cut them off in traffic. Ordinary men and women committing horrible random acts of violence in a society where anxiety and anger are, sadly, as common as the guns that have taken so many lives.

I said at the start it’s hard to know what to say. I don’t pretend that I’ve added anything new to the dialogue. Many of you have already posted forcefully and eloquently, voicing your concerns. But I write anyway because writing at least helps me process the pain —and the anger — of seeing yet more blood senselessly spilled on our nations streets.

And I am angry. I’m angered by the hypocrisy of the so-called leaders who solemnly proffer their prayers for the victims and condemn the “cowardice” of the attackers but who themselves lack the courage or will to act. And, if I’m honest, I’m angry and ashamed I haven’t made a greater effort.

I know that this is a deeply rooted social problem, I know it won’t be fixed easily. But it won’t change at all if we don’t act. And if we don’t act, we tacitly acquiesce in the bloodshed. We need to decide where we stand and whether we have the will to engage. This is one of several moral crossroads we face as a society. Our choices will define us for generations to come.

As I said, I know I haven’t done as much as I could. But I will try. I hope you will too. I donated again today to Everytown for Gun Safety. If you care, join me. I hope that you will insist on meaningful action from legislators. I hope you write or call them (I am). I hope you will join a march, post on Facebook, Twitter, Instagram, or inspire a friend to do more than just deplore the horror. I hope we all will just do something.

Next time it could be your child, or spouse, or grandchild who is lost. Act now.